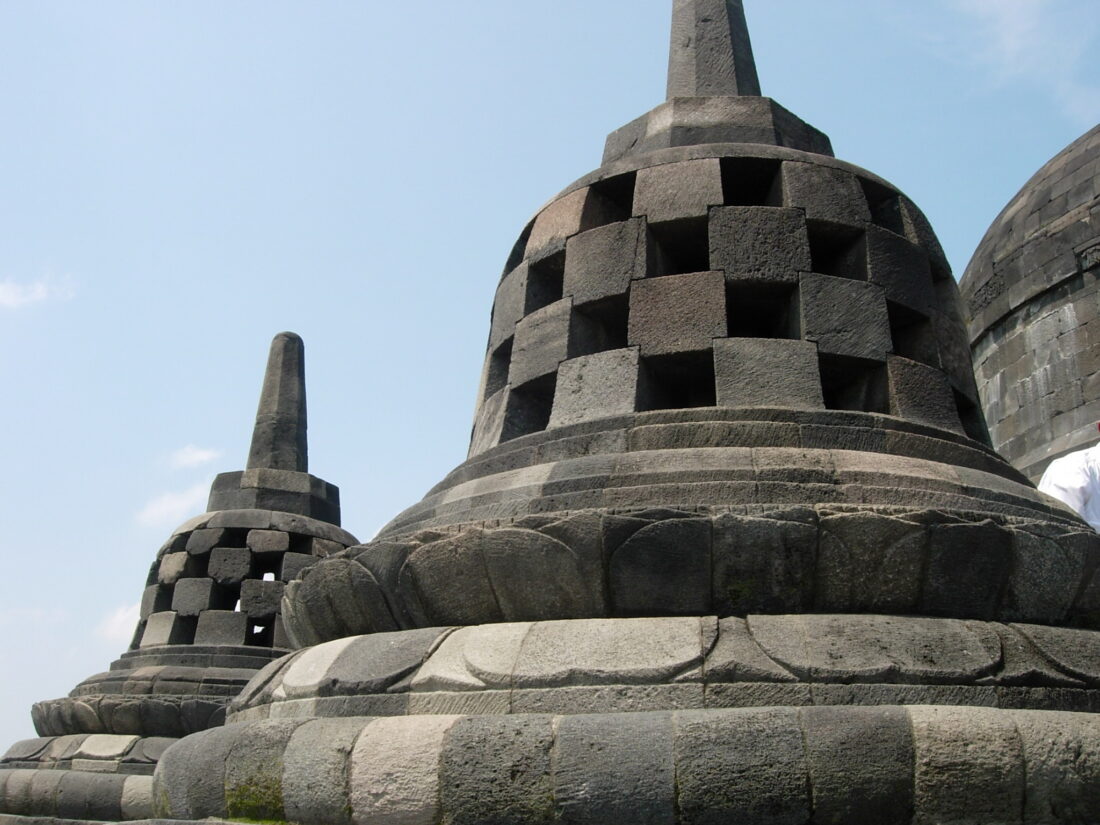 Here, back home in Bali after 4 days in Java, I write aided by a caffeine high from coffee grown and roasted locally and labeled called “Cosmic Coffee”. Zip and Zen at the same time. The trip to Yogyakarta – an hour flight to the west in central Java where I used to live – was spent vising old friends, running around doing lots of buying, and enjoying one of my oldest loves in Indonesia, Linda. On Monday, my friend Meghan who is my family in Bali, needed to get out of town for the day and came with me as I headed to the airport to fly to Yogyakarta. By the time she was to drop me at the airport, she spontaneously decided she needed more of a break from hectic life, and hopped on the plane with me, no luggage, or anything. We landed and she bought underwear, toothbrush and several tops, good to go for a few days. Great lesson for living in the moment. So after a few days of working hard, we spent our last 24 hours up at a 5 star resort & spa (owned by friends of Meghans!) near Borobudur, the glorious ancient Buddhist monastery an hour north of Yogyakarta (check it out – http://wikitravel.org/en/Borobudur), Ohhhhhhhhhhhh such place to get away to, and be in the presence of. Imagine being up on hillside overlooking a huge valley below rimmed to one side by a ridge of hills with pointy tips that are called locally “Menorah Hills” (I lived in the area for 3 years and never heard that name before – love it!). To the south rising out of the plains is the outline of Mt. Merapi, seemingly small and quiet at this time, but a bold silhouette none the less. She last erupted in November 2010 devastating villages, causing 350,000 people to relocate and killing 350. I was waken at 4 AM with a stereo of loud speakers blaring out the mosque’s call to prayer, I thought I was dreaming. But no, in the land of the most Muslims per square kilometer, the ringing of crackly calls from 3 directions resonated across the valley and bounced back off the hills to wake us up to pray (and remind us too) before the sun begins to light the day. Competing with the blaring prayer calls, or perhaps in chorus with, the rosters crowing cock-a-doodle-do to greet the new day. The whole valley was shrouded in low lying clouds I could only see because of the glow of the moon, a few days past full. As the horizon started to glow, the streams of clouds pinked up, I was able to make out the contour line of the Borobudur temple nestled in the valley poking out of the trees. I have been there many times over my 25 years in Indonesia, but seeing it from a perspective from above, going from a dark outline to being able to distinguish the individual elements of this phenomenal piece of architecture and history in the early light, blew me away. We wondered what it was like in the 9th century when all you would hear in the area would have been meditative Buddhist chants emanating from the temple….similar yet different from the Arabic prayer calls and muffled motor bikes. We drank rich coffee and watched the whole valley awake, the clouds lifted as the whole area came alive with the sounds of the motorbikes and trucks moving people to work, the fields, kids to school. Eventually it was too hot to sit where we were and we ventured out from the grounds of the hotel and walked through the local village, greeting the locals with big “Hellos” and “Selamat Pagi” Good Morning. Home again, took a dip in our private villa pool and prepared to head back down from this sacred land into the bustling city of Yogya. As I dried off from the swim, I heard the noise of a plane near by that grew louder and louder AND LOUDER. From behind the trees came the blast of sound, startling me so, when I saw of 7 fighter jets flying in formation over the valley. You can imagine the contrast between then and now as they swept by the temple in the valley below circling around and around and around. Beyond belief really.

Now, back home in Ubud, I am getting organized to do a big push of lots of work for the next 10 days, as my buying has taken a back seat to visiting all my loved ones. As it should. But first, I must pack an overnight bag to head down to the beach for the night with my friend to her “beach house”, to swim and walk the black sand beaches. I imagine being woken tomorrow morning from the breaking waves pounding the shore replacing the calls to prayer of the mosques far off Java.

Love from Bali, here to you, from my happy heart to yours – Laura.