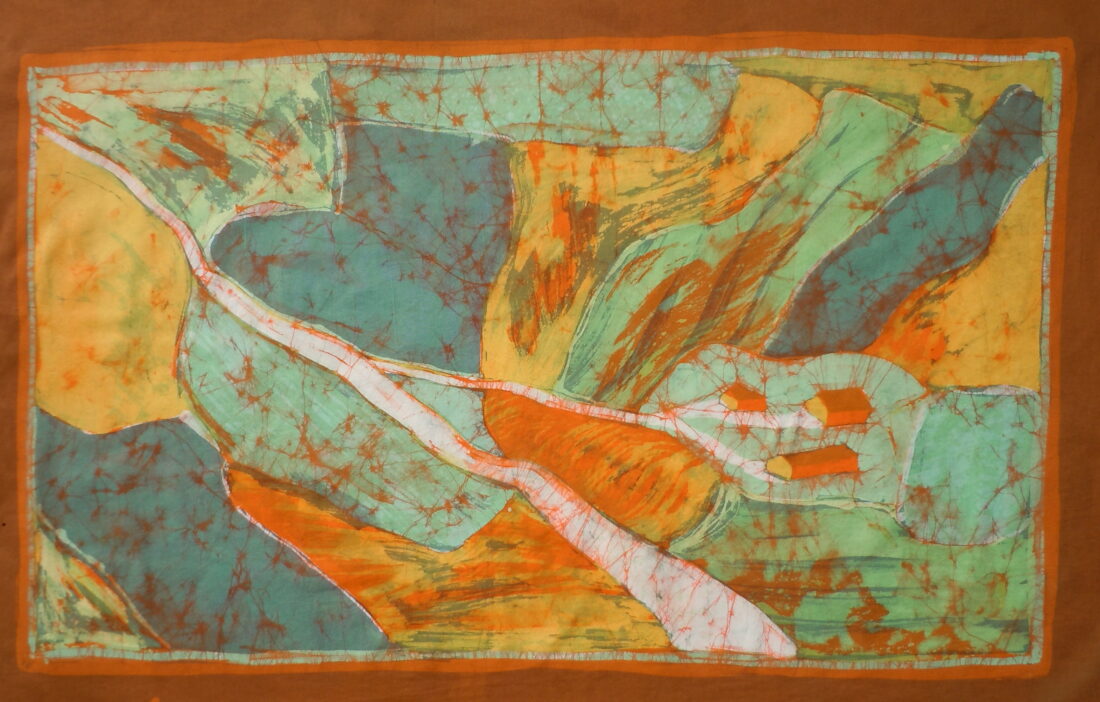 Laura Cohn is an artist and long-time AGTS volunteer living and teaching in Bala Cynwyd, PA. A painter by nature and in practice, she also earned her degree in Human Ecology. Laura spent 1988-1991 working in that capacity in Bali. There she fell in love with the Indonesian people, its culture and its great abundance of art. In Laura’s experience, it seemed that the extraordinary sculpture, masks, fabrics and religious symbols (just to name a few) were less hailed by its people as ‘fine art”, and instead were more of an ever-present feature of their everyday lives.

With a painterly eye, Laura appreciated the opportunities she had in Indonesia to see firsthand the beauty of their artisanship, particularly of those who worked in batik. After moving to Java (‘91-94), she began to learn and practice the art of batik, finding it to be a complement to and expansion of the oil painting she had always enjoyed. In batik, she found that the transparency of color inherent in the process, as well as the interaction of colors as they were layered upon the fabric, gave Laura an inspiration and a freedom that she could never have gotten from oils on canvas alone.

These days, Laura spends two months a year traveling throughout Indonesia in an effort to support and encourage the local artists who live there and expose their work to a wider, appreciative audience. Each year she gathers art pieces (statuary, fabrics, masks, bowls, etc…) to bring back to PA, where she sells them in a fair-trade show titled, From Bali to Bala. She loves sharing the artistry and culture of Indonesia with others. This annual show allows Laura to keep in touch with her artisan friends, and gives her the opportunity to return often to the land and people she has come to admire so much. In addition, a portion of her sales from From Bali to Bala, go to support an Indonesian non-profit in need.

The majority of our presentation was spent enjoying slides of Laura’s many travels in Bali, and several other of the over 17,000 islands that make up the country of Indonesia. Of these, Bali is the last remaining Hindu-dominant culture; literally an island of Hinduism amongst the largest population of Muslims in the world.

Buddhism is another influential religion among the Balinese, walking hand in hand with Hinduism and Animism. Animism might be described as a religion imbuing both humans and nonhumans with a spiritual presence. Animism often features animal spirits, with hints of black magic, superstition and a focus on high [goodly] and low [evil-tending] spirits. This is evidenced everywhere from dress, to sacred roadside offerings, to a reluctance to swim in the ocean (where many “low” sprits are purported to live.)

We must be careful of feeling wary or condescending toward the link between religion, superstition and life choices within Balinese culture. Sometimes this is just our “first-world” or Western bias. The Balinese superstitions have actually contributed greatly to their conscious preservation of culture, religion and place. One example given was that even in these days of increasing tourism and new growth, no building – except religious temples – can be constructed taller than a coconut tree. This regulation came about after a bulking new hotel was begun. Shortly afterward a terrible volcanic eruption shook the island, destroying the hotel as well as many local homes and businesses, taking thousands of lives and causing mass devastation. It was widely believed by the Balinese that the High Spirits were unhappy with the ugliness and height of the new construction, which they found offensive. As a result of the new regulation, though, the character of the Island remains intact – much to the pleasure of the people who appreciate its natural state and, hopefully to the appeasement of those High Spirits as well.

Along those same lines, the concept of serasi is critical to the everyday lives of the Balinese. Serasi essentially means “balance.” It is important to balance both the high and low spirits even within one’s own body. One way you can see this is that no person can enter a temple without a sash worn at the waist. The sash is intended to separate the two halves of the body – the lowly, physical parts, from the higher, more spiritual/intellectual parts. To quote Laura, a scarf or sash worn at the waist “separates the sacred from the profane.”

And like Catholics who go through Confirmation or Jews who celebrate their Bar & Bat Mitzvahs, Balinese, too, experience a coming of age ceremony, the Potong Gigi. Designed to balance out their animal natures, young adults experience a tooth-filing. This ceremony, during which the points of the canines are filed flat, is intended to make a person’s teeth less animal-like, and is typically performed before a rite of passage, such as marriage. As an aside, many Balinese masks of dragons and devils carry exaggeratedly long and sharp teeth. This graphically represents that their animal-natures are of the low (what we in the West might, somewhat superficially, classify “evil”) spirits.

Clothing, from the sash discussed before, to the sarong typically worn by both men and women, are both everyday and artistic. They are symbols of spiritual balance and of self expression. A sarong is on its most basic level, a two meter length of dyed cloth. Within those two meters, though, you might find a world of colors, patterns and artistic influences. Made by hand, these amazing everyday art pieces are characteristically Indonesian and are beautiful examples of the art and craft of batik. Of the Indonesian islands, Java is most noted for the quality of its batiks.
Batik is a wax-resist and dye process. Hot wax is applied on fabric via a canting (pronounce chanting). The fabric is dyed, waxed and dyed again in a layered process until the desired pattern is complete. The areas that are printed with the wax hold on to the original dyed (or un-dyed) color; and are boiled off between applications. In some designs, where a pattern is large and repeated, another tool called a tjap (pronounced chop) is used. A tjap resembles a large copper printing plate. It allows wax to be applied to a larger section of fabric at one time. In Java, you often see a division of labor with men doing the heavy tjap work and women working with the canting which are much lighter and are handled more like a pen.
At her studio in Pennsylvania, Laura might utilize a canting when creating her more intricate designs; but more often than not, is just as inclined to use whatever is at hand for the effect she’d like to create- e.g. brushes of varying widths dipped into electric skillets of molten wax. Even the type of wax used affects the final outcome of the piece. Laura shared that paraffin wax will leave a distinctive crackle; whereas bee’s wax does not. A great deal of skill is involved in handling the canting itself which must be angled “just so” to control the flow of the wax from the tip. Batik artists must possess and hone skills that are both artistic and practical. Once mastered, the results are stunning. In spite of her intimate knowledge of color theory, one of Laura’s favorite aspects of batik is the surprise once all the wax is boiled off, and the final piece is revealed! She takes great pleasure in the transparent nature of the colors; and the overall effect of the interactions amongst the colors and patterns in the finished piece.

Laura has donated a print of her work, “Fields di Mimpi (Fields of My Dreams)” to the AGTS portfolio. It is a gorgeous batik landscape in blues, greens, yellows, browns and oranges. Strikingly similar to the colors of a photo she had taken of a volcanic pool on one of the Indonesian islands; this batik is actually an imagined “arial landscape” of her native Iowa. I wish you could have seen the original cotton textile, and its hand-carved frame – as well as several other samples of both Laura’s own work and some of the Balinese examples she brought to share. These pieces are really extraordinary.