Watching the ducks & Yogis waddle by…. 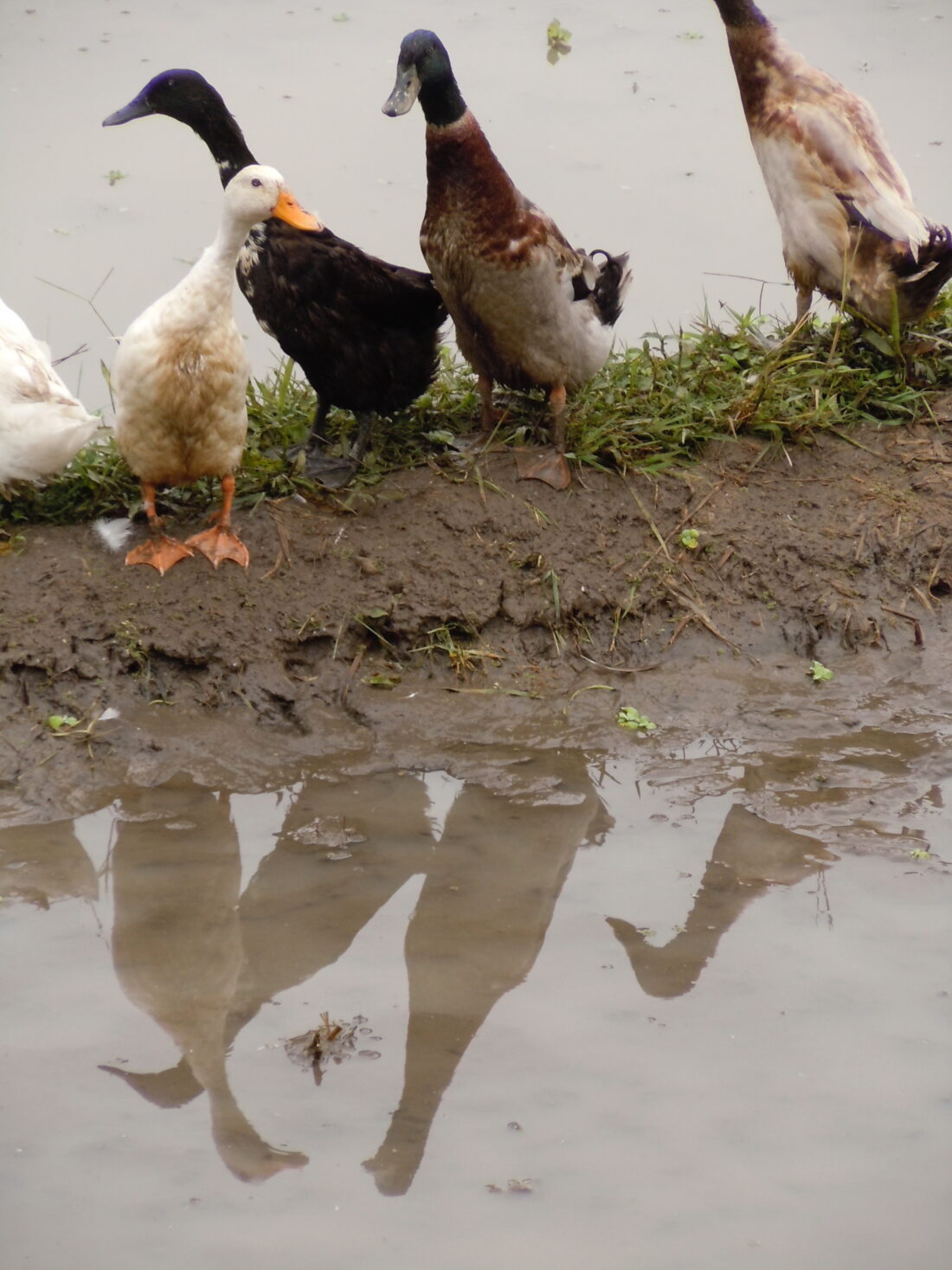 Watching the ducks & Yogis waddle by….

Sitting on my porch, kind of like back home where I overlook the deep hibernating trees of Carpenters Woods, but here instead the fa­­­llow fields with clumps of green & brown cut rice stalks mired in the dark earthy mud, surrounded by shimmering pools of standing rain water.  It is mid-afternoon, just south of 90 degrees, and a warm wind blows through the trees, offering only a slight reprieve from the heat.  I love my neighbors the ducks as they gaggle, quack and waddle around, pecking bugs from the still pools, gleaning old rice grains missed at harvest time.  The farmers rest the fields (padi) every 3 or 4 growing cycles to give the earth a chance to regenerate without having to work so hard, and in turn, perhaps the farmers get a bit of a retreat as well.  Oh, did I mention, not a cloud in the sky, less three soft white puffs just above the tree line off in the distance, dotting the palms like floating asterisks.

This has been a fast-paced trip for me this year, lots of running to and fro, working, schlepping, doing, not enough reading, sitting, being.  But I have had wonderful visits with old friends, which is half the reason I call Indonesia home.  Friends of 30 years, many who still live here, and some I meet up with each year as they return back again, nurturing a deep connection to this place as I do.  Tomorrow morning, I will meet up with a group of old friends for our annual Oscars watching party, Monday morning here at 9 AM live, drawing me back into reality of the US days before I am slated to return.  The slow wakeup call begins….with Hollywood as the lure no less.  The other day we had real wakeup call at 4 AM with the loudest sonic thunder boom that I have ever heard in my life, right over my head rattling the windows as I trembled in bed.  It was so extreme, it woke up all the ducks, crickets, and frogs, and the cacophony of animal sounds, following the thunder, was almost as loud as the boom itself.  I wonder what they all thought.  Within minutes, silence returned to our fields as the lightening flashed brightly as if to extinguish the storms might.  Years ago, an old friend said about her new-found self-awareness, it was the “wakeup Olympics” – and this was the loud starters whistle at the beginning of the race.

As change is inevitable and so does Bali change, I can easily wax nostalgic about the distant and recent past before the influx of the newest immigrant culture of mass tourists.  In Ubud, it is the yoginis and their spandex butts walking (not jiggling as mine would) to the nearest yoga studio to practice their Oms, surrounded by the saronged Balinese Hindus lighting incense to carry their prayers off to their gods that tether them to deep ancestral ties.  I suspect the white yogis feel a sense of connection to this very spiritual place, hence it is one of the reasons they are here.  Good for them, who am I to judge?  I only wish they would dress more appropriately when they leave the yoga studio, to cover up so the local gods don’t get distracted by all the exposed skin and tight booties.

Kadek and Dewi, who work at my local guesthouse, just sat themselves down in the shade of the tree in the little garden in front of my neighbor’s porch, to weed the grass plucking the weeds, one by one, fistful by fistful.  In contrast, on a larger scale for sure, last week I watched an old farmer up high on the mud wall of the rice terraces cutting the thick grass on the path, not with a sickle like he might have in years past, but with a gas-powered string trimmer whirring away.  Ah progress, non?  Again, who am I to judge the old farmer seeking an opportunity to finish his work in much less time?  Before me, Dewi, the beautiful young women who brings me breakfast with a shy smile each day, is wearing a think long sleeved maroon sweatshirt synched around her head framing her glorious smile.  Yes, it is still hot as hell, but the latte colored Balinese do not want their skin to darken, remnants of an old colonial past where the lighter skin Indonesians faced less discriminated by the Dutch powers that be.  I am sweating more just watching her.  Perhaps it is time to move on from tea to cold beer.   For me rather than practice yoga I think I’ll practice being still, just being on my porch with a cold Bintang (local beer), enjoying the breeze, ducks, and the fact that my work is almost done so I can be still for a change.  Also, I love being a witness to the innocent flirting between Kadek (male) and sweet Dewi, sounding similar to the chirping harmony of the song birds in the nearby Cempaka tree.

As I will return to the cooler temps of Philadelphia later this week (after a fun 24 hours in Hong Kong!), I will hold on to this heat, the cloudless sky, and chorus of quaking ducks when I sit on my Philly porch watching and waiting for the Warblers to return to the woods for their annual migration.  Will it be spring in March or will be have snow into April like last year?  I will take comfort in the fact that at least it won’t be the fine snow-like ash of the active volcanic Mount Agung raining down on Bali as it has in the recent past.  So fortunate the Mother mountain has been relatively quiet on my visit this year, and I wish more of the same for the Balinese when I leave them.  I close in reverence for the nature before me, the mountain behind me, and the promise of spring for us all.

From the heat of my Balinese heart, sending love on the warm equatorial breeze.